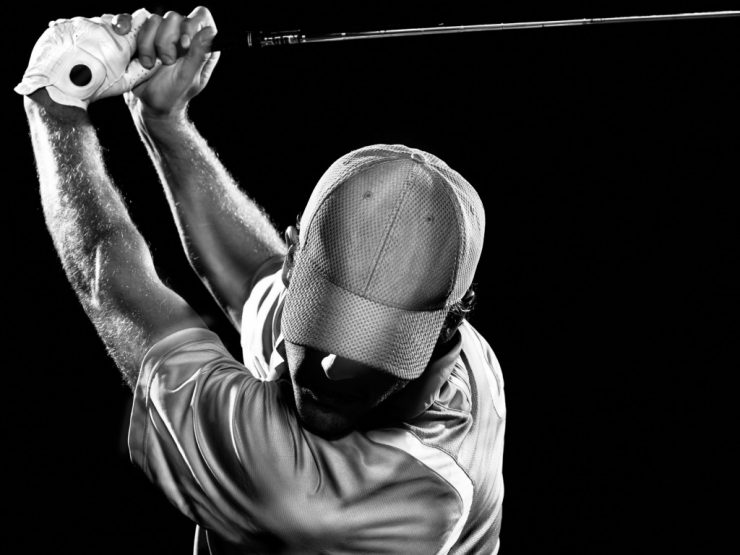 The keys to the success of the Costa del Golf 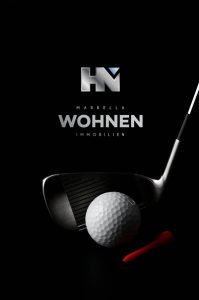 Why do golfers choose the Costa del Sol to enjoy their favourite sport? This and many other important questions analysing the motives of this key group of travellers are answered in an exhaustive study carried out by the Costa del Sol Tourism governmental body, which also underscores the golf industry’s economic repercussions in this premier tourist destination.
The study report was recently presented officially by the president of Costa del Sol Tourism and the Diputación Provincial de Málaga (regional parliament), Elías Bendodo, accompanied by the president of the Royal Andalucia Golf Federation, Pablo Mansilla.
One piece of data especially worth highlighting is the fact that, according to the study, “golf’s impact on the Costa del Sol is valued at €1,410 million in direct and indirect production, and €775 million in direct or indirect revenue”.
“To gain an idea of this sector’s relevance,” noted Bendodo, “the average amount spent by a golf tourist is more than €1,800, for an average stay of 12.31 days.”
The study also revealed, he added, that golf tourism had become one of the Costa del Sol’s main ambassadors, with the Coast home to 67 percent of the total number of courses in Andalucía and having more courses than any other provincial area in Spain (69).”
Bendodo emphasised the effect this segment had on creating employment, “with nearly 17,700 jobs, either direct or indirect”. The study covered the area known as the “Costa del Golf”, which includes Málaga province and the Sotogrande area at the eastern end of Cádiz province. 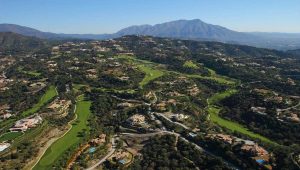 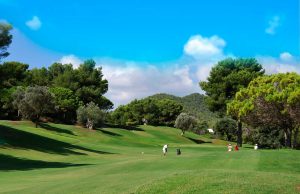 Decision factors for the choice of the destination 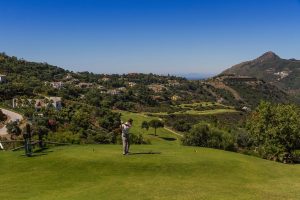 More than three-quarters of the tourists interviewed highlighted the weather as a decisive factor when choosing a destination.
Next in importance were loyalty to the destination and the diversity of leisure opportunities offered by the Costa del Sol/Costa del Golf. A third block of key factors identified by tourists when choosing Málaga as a golf destination included visits to friends and family, the diversity of the offer that exists, attractive resources and recommendations.
Golf tourists who visited the Costa del Sol/Costa del Golf used the internet as their main source of information for finding out about the destination’s golf facilities – more than half of the golf tourists interviewed. Fewer than five per cent of the respondents stated that they had consulted the website visitacostadelsol.com. Next followed travel agencies, mentioned by about one in three of the tourists interviewed.

Evaluation of the Destination 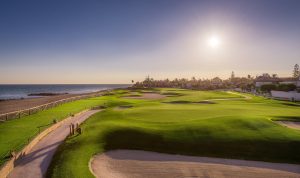 Golf tourists gave the Costa del Sol/Costa del Golf an average rating of 9.24 out of 10 as a destination. The most valued aspect was personal security, followed by service and treatment received during their visit, taxi and train services, value for money, tourist information available, and leisure and entertainment options, all receiving scores of 9.24 or higher, the destination’s average score.
In the second group of most valued aspects were shopping, available accommodation, beaches and their facilities, and urban environment, with ratings higher than 9.0 points. The high scores these tourists gave to other aspects should also be noted: road signs, catering, accessibility, car hire, bus services and access to the destination. These were all given scores of higher tan 8.17 out of 10.
Also worth highlighting is the high degree of recommendations, with 98.7 percent of the tourists interviewed saying they would recommend the Costa del Sol/Costa del Golf as a golfing destination.
Golf tourists also showed an exceptional degree of satisfaction with their experience on the Costa del Sol/Costa del Golf.
More than nine out of 10 golf tourists interviewed rated their stay on the Costa del Golf as very satisfactory and close to 4.3 per cent as positive. The “as expected” degree of satisfaction was 1.2 percent of the total number of golf tourists interviewed, with no respondents giving rankings of “negative” or “very negative”. 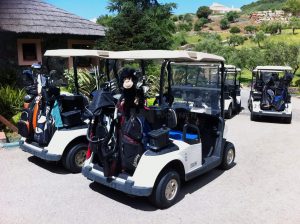 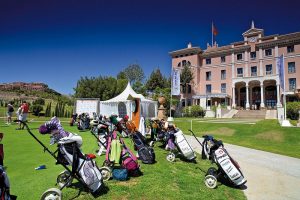 An analysis of the opinions of a representative sample of internal agents (businesspeople, professionals and public officials from the Costa del Golf) led to the following conclusions being drawn…

Scandinavia was reported to be the leading strategic market for the future, followed by the UK and Germany. Ranked in third place were the eastern European countries, France and Ireland. Other interesting markets were Spain, Holland, Switzerland and Belgium.

The experts interviewed indicated that the destination must be able to guarantee an ability to play golf and to enjoy excellent food and wine. They also agreed in highlighting the importance of selling the golf destination together with the Costa del Sol/Costa del Golf’s complete leisure and fiesta options. Other attractions linked to golf and considered of great interest for this segment’s profile were culture, health and beauty, luxury establishments and accommodation facilities. They also indicated that it was of interest to design products for senior golf tourists who enjoy long stays. This is a strategic segment, given the greater availability of time and money that they have.

When asked about the reasons why the Costa del Sol/Costa del Golf had comparative advantages over its competition with respect to the golf segment, the answers were…
Essentially, the weather – the first reason given by a large majority.
In second place, they indicated the destination’s wide range of complementary options, with the variety of nightlife, leisure and cultural activities, as well as the volume and concentration of golf courses offered by the Costa del Golf.
In third place were such aspects as the quality of services and facilities, the availability of an international airport with connections to more than 125 destinations, security, infrastructure and good communications.
In fourth place were other advantages such as value for money, wide range of hotels and other types of accommodation, and being a well-consolidated destination.

Satisfaction with the Quality of Services

Another interesting aspect was the opinion of businesspeople, professionals and public officials about the main services related to golf tourists.
There was a high perception of the leisure and recreation options complementary to golf, followed by gastronomy and the wide range and high quality of hotel accommodation, all of which received ratings of over eight out of 10.
Secondly, with notable scores between seven and eight out of 10, were the city environments and the quality of the courses and their facilities, together with the cultural options, service and treatment, and quality/price ratio.
Finally, although with relatively low scores, came rental accommodation and the pace of a round out on the course, both below seven. 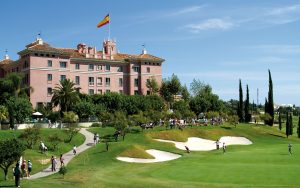 Faced with the question of which Costa del Golf attributes were most interesting for this segment and its future competitiveness, experts interviewed indicated that it was necessary to guarantee the ability to play golf and to be able to enjoy excellent food and wine options, as indicated by nearly two out of three respondents. They also agreed in highlighting the importance of selling the golf destination together with the Costa del Sol/Costa del Golf’s complete cultural offer, as indicated by about half of the interviewees.
Linked to golf, other attractions of great interest for the profile of this segment were the wide range of leisure, fiesta and health and beauty opportunities, indicated by around a third of respondents; followed by shopping, inland areas and nature, the beach and enjoying the magnificent weather.
They also indicated that it was of interest to design products for business tourists (MICE) and golf for older couples.
Other attractive attributes were the destination’s extensive complementary options and, for long-distance travellers from countries including Japan and Canada, authentic Andalusian traditions.

Satisfaction with the Quality of Services

There was a high perception of the leisure and recreation options complementary to golf, followed by gastronomy and the wide range and high quality of hotel accommodation, the atmosphere of the cities and the quality of the courses, all of which received ratings of more than eight out of 10.
Secondly, with notable ratings between seven and eight out of 10, were the quality of golf course facilities, the cultural options, the service and treatment, the quality/price ratio and the available rental accommodation.
Finally, although with a relatively low score, the pace of play was mentioned, with a rating of 6.8.

Forecast of Golf Tourism Activity in 2021

In general, for the year 2021 the operators anticipated an increase in their activity with the Costa del Sol/Costa del Golf well above the sector’s global average.
They estimated growth of 6.3 per cent in overall evolution of golf activity in 2021, compared with 18.5 per cent on the Costa del Sol.

Economic impact of golf tourism on the Costa del Sol

The average daily expenditure of the golf tourist was €148.40, which included the cost of transport to the destination, accommodation, catering, food purchases, non-food purchases, transport at the destination, cultural or leisure expenses, green fees, buggy and club hire, other expenses related to golf, etc.
In addition, as indicated in the section on analysis of demand, they stated that on average they stayed for 12.3 days, so the average expenditure per tourist was estimated at € 1,827.

It was estimated that this expenditure generated about 17,700 jobs. Of these, 10,580 were direct jobs and the other 7,100 were generated indirectly or induced.
The sectoral distribution of this impact reflected a higher incidence in the most labour-intensive sectors, such as hospitality (35.9 per cent), shopping (30.7 per cent) and sporting, cultural and recreational activities (13.1 per cent).

If you are interested in property in or near golf courses in Marbella and the surrounding area, type

GOLF PROPERTIES  to visit this section.

Copyright © 2022 · Marbella WOHNEN Immobilien
Legal Advice - Cookie Policy | Powered by Inmo.Design
This website uses its own and third-party cookies that enable the operation and provision of the services offered on it.
the services offered on it. You can accept or reject the use of cookies by configuring your browser settings or by
browser settings or consult your options by clicking on more information.
More informationACCEPT
Manage consent